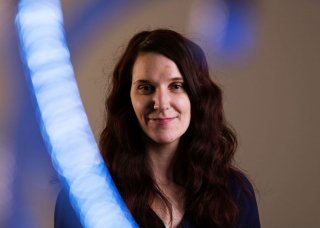 CEO Kelly Golding is catalyzing growth with automation and a push into wind energy and other markets.

Golding’s grandfather, Tom Jones, started the company as a hose manufacturer in central Denver in the early 1970s. Nearly 50 years later, she’s taking the reins from her dad, Al Jones, who ran the company after Tom passed away in 2004.

The company pivoted from hoses to gaskets in the 1970s. “Everybody can make a hose, but not a lot of people can make gaskets,” says Golding. “There’s not a lot of gasket houses out there.” Denver Rubber’s gaskets are now on satellites, wind turbines, and pretty much everywhere in between.

The same adaptable mindset continues under Golding’s watch, as Denver Rubber Company has diversified into new markets in recent years. The operation now makes largely custom gaskets, as well as hoses and other parts, from a notably long list of materials for OEMs and other customers in such industries as aerospace, oil and gas, medical, snowplowing, and floor care. The company also acts as a distributor for a few other manufacturers, but this only accounts for about 5 percent of sales.

Vestas has emerged as one of the company’s top customers. After providing the Danish wind giant with gaskets, Denver Rubber Company developed a manifold used in the manufacturing of blades in Brighton. “That’s our proprietary product,” says Golding. “We actually patented the manifold system that we created for him, so that is ours.”

Floor care was until recently Denver Rubber Company’s primary market, and it still sells to players like Kärcher North America.

On custom jobs, she notes, “We try to not do just one gasket. If somebody comes in off the street and he says he needs just one little gasket, that’s not what we do. If somebody that needs 1,000 gaskets, that’s where we are.” The catalog of stock materials includes a long list of rubbers and elastomers along with industrial plastics, fibers, textiles, and foam.

An in-house team helps clients with design and product development. Customers “don’t have to worry about that,” says Golding. “We’ll take that over and focus on making sure it’s what they need.”

Outfitted with CNC knife tables, presses, a waterjet, and a hose shop, the ISO 9001:2015-certified company has made a concerted push into automation in the last five years. “We realized how quickly stuff gets done,” says Golding. “There’s no staging time.”

That led to the acquisition of five CNC tables and a move into a 36,000-square-foot facility in June 2018 to accommodate the growing inventory of equipment.

Denver Rubber Company’s largest accounts are in Colorado, but Golding notes, “We are very national.” The market extends beyond U.S. borders: Exports account for about 10 percent of sales.

The ever-expanding market has catalyzed revenue growth from roughly $1 million to $6 million in the last five years as the size of the staff doubled. Golding anticipates about 17 percent growth to hit $7 million in 2019.

It’s been a 12-year journey to the head office for Golding, who started working on the production floor for her father after graduating from Eaglecrest High School in Centennial. She moved from production to accounting and purchasing before buying into the company as an owner and advancing to CEO.

She notes that a number of employees have been with Denver Rubber Company for a decade or more. While that means turnover is low, it also means there’s a lot of institutional knowledge in the heads of the longest-tenured staffers. Golding points to recently retired salesman Al Welch: “He’d been with the company 17 years, so it’s a big deal.”

The supply chain can also be challenging. When Rogers Corporation acquired a key silicone supplier, many smaller accounts — including Denver Rubber Company — were cast aside. “Everyone was going into panic mode trying to find silicone,” says Golding. “We were able to find someone in California.”

A silicone shortage also hampered the company in 2018, but the industry “has gotten past that,” she adds.

The experience led her to look to diversify the supply chain, but there’s a downside to spreading out orders: Keeping it exclusive makes the orders bigger and the supplier more responsive to the company’s needs.

Opportunities: Golding sees an opportunity to market Denver Rubber Company’s proprietary blade-manufacturing manifold to other players in wind energy. “We are trying to get it out to other companies,” she says.

The buying cycle for Vestas and other large turbine manufacturers is notably long. “It took a couple years to get in with them,” Golding notes.

A new digital strategy from Crazy Good Marketing is also bearing fruit. “They have been able to look at our website, tell us where it’s lacking, and track who’s looking for what, so we can market that more,” she says.

Needs: “We do need more people,” says Golding, forecasting five new hires by the end of 2019. “Currently, we’re looking for someone in production and someone in HR so I don’t have to do it anymore.”